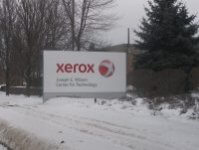 The OEM has recently laid off staff in a multitude of management positions. The Democrat & Chronicle reports that union-represented employees, including manufacturing and production workers, were not affected by the redundancies. Gary Bonadonna, a union leader, revealed he first heard of the news when learning that his management liaison had lost their job. According to WHEC, Xerox attributed the layoffs to “difficult decisions”; Sandy Mele, who was not dismissed, said: “It’s always nerve-racking. I’ve heard it was happening but it’s been so quiet. I haven’t heard much of anything.” Another employee, an outside contractor named only as Joe, admitted that “everybody’s nervous,” … Pour en savoir plus… →